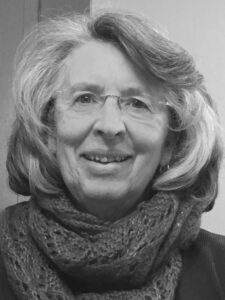 Renee Meador is a retired secondary mathematics teacher from Big Horn, WY. During her career, she taught in Texas, Ohio, and Wyoming.

Renee finds inspiration in the everyday: a patch of pink lupine, being startled by the resident Great Horned Owl, standing under the stars. Fodder for narrative poems include family, relationships, and the western ethos. She enjoys being outdoors as much as possible, especially in the mountains, and preferably on a horse.

Renee’s poems have appeared in several anthologies including She Speaks to Me (Stanford) and Blood, Water, Wind, and Stone (Howe). She has two children, Charles and Amelia, and seven grandchildren.

Look for Renee’s upcoming poetry collection, My Father; My friend.